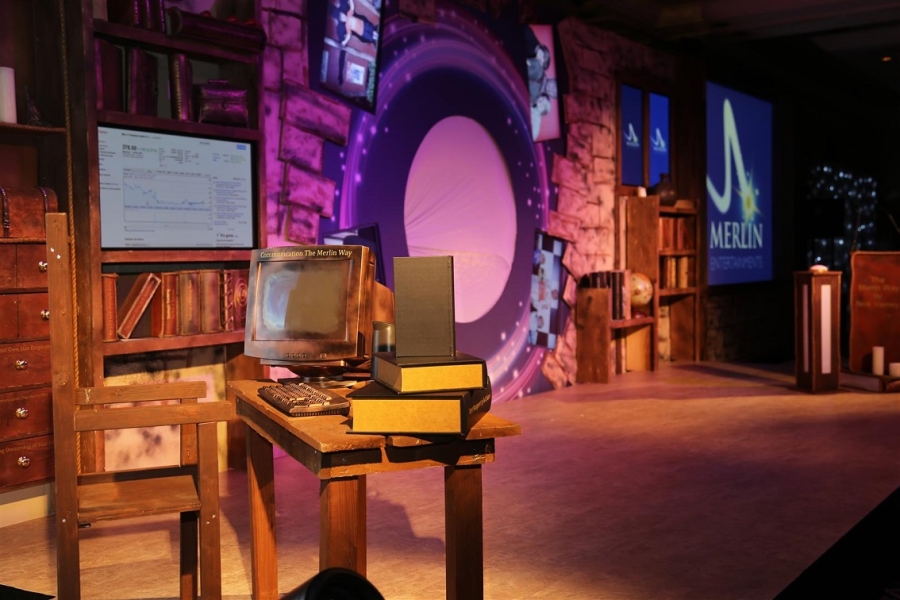 For several years now, Conference Craft have been chosen by Merlin to produce their annual management conference. Every year, the event has gotten bigger and better and this year was no exception. Not only was this the biggest Merlin event that we have managed, it was quite possibly the biggest project we have undertaken in all of our years as event management specialists.

As in previous years, Merlin’s annual conference was held at the Alton Towers Conference Centre. Continuing on from last year’s “Quickening” theme, we constructed a similar set with the theme “The Magical Share Price”. The entire event was centred on demonstrating Merlin’s journey from its founding in 1998 to the successful PLC it is today.

The main conference was staged on the Tuesday in the state rooms, which was also to be the venue for the gala dinner on the following night. We arrived the previous weekend to install the stage and set, lights, audio and other systems.

We created a stage to look like a wizard’s office, complete with a desk, bookcases, and a custom-build lectern in the shape of a large book. The painted-brick effect backdrop was complemented by a swirling vortex feature designed to create the illusion of being pulled into The Magical Share Price spell.

To achieve this effect, we shaped a funnel from stretched Lycra onto which we projected ripple effects from behind. We completed the effect by projecting coloured lighting and spinning gobo effects onto the front of the funnel.

The stage comprised a number of monitors. On either side of the stage were large projection screens and we surrounded the swirling spell effect with 4 plasma screens running rotating images of great customer experiences.

Other screens on the backdrop doubled as windows and showed the London city skyline at different points of the day. A plasma screen built into the bookcase also displayed live updates of the Merlin stock price, further emphasizing the theme of the event.

In order to queue the varying media from different sources, we used two Apple Mac Minis with multi output graphics cards running our new Qlab-3 software. This recent investment has made complex video operations like these much more efficient, allowing us to concentrate on other aspects of the event.

A front truss, flown parallel with the stage, housed most of the lighting, projection and PA Speakers. Two additional trusses flown down either side of the room provided effects and wash lighting for the Gala dinner and we also used our three additional LCD projectors to bring all of the merging brands to life during the dinner by projecting rotating logos around the room onto the walls.

Once again, we used our audience engagement systems to make the event even more interesting for the attendees. With this system we were able to conduct live voting using tablets situated on each table. This brought an interactive element to the occasion but it also provided event information and allowed for candidate registration and live messaging. In this way, we ensured that the event was 100% paperless, not to mention more convenient for everyone.

Aside from the conference room itself, we were commissioned by Merlin Magic Making, Merlin’s creative and development division, to install an exhibition hall showcasing some of their brands and support services. The exhibition was run on the Wednesday lunchtime in the Emperor Suite and Dragon Bar, and consisted of a central stall and 12 smaller kiosks, each one representing a particular offering.

We constructed all of the kiosks offsite and assembled them over the weekend, each one consisting of a semicircular stand and a backboard with graphics on printed canvas. To complete the kiosks, we incorporated video screens housed within frames to display live presentations. When the exhibition went live, the kiosks were turned into live voting kiosks. Again using tablets and the audience response system, the attendees were able to vote for the best services, be it HR, IT or customer care.

The rest of the room was decorated with starcloth and bookcases stacked with gold coins to create the atmosphere of a mystical, fantasy bank. We began setting everything up on the Sunday but, as the room was required for other events, we had a small window of time to install everything and then dismantle it when the exhibition was finished. This tested our logistical skills, but it was nothing that we couldn’t handle.

To crown everything off and lend a feeling of authenticity, we also added smoke machines, fixed and moving head effects lights to add atmosphere, as well as live as custom sound track and sound effects.

The exhibition also included an impressive entrance tunnel which could not be constructed until lunch had finished on the Tuesday. The tunnel was lined with starcloth and featured almost 100 old picture frames displaying the top customer experiences. The picture frames were a challenge by themselves, as we had to scour the south of England to source them all, as well as mounting the images.

After a lot of preparation and a long weekend of hard graft, the Merlin Annual Management Conference was a huge success. Everyone who attended had a lot of fun and they were impressed with what Conference Craft achieved. We were pleased with it ourselves and we’re looking forward to surpassing our own standards next year.